In February 1981 the side wing, the garden house and a shop apartment in Waldemarstrasse 36 were occupied.
The occupied house was called HeileHaus. The squatters came from self-help and learning groups who had been dealing with naturopathic treatment of diseases for some time. From a critical attitude towards orthodox medicine together with the glut of tablets in the pharmaceutical industry and the state “health system”, the wish arose to realise a holistic health concept – consisting of good nutrition, exercise, body work, hygiene, advice on a naturopathic basis, self-responsibility and space for discussions and meditative activities in the HeileHaus. The house had stood empty for 8 years before the occupation and was in a very bad condition.

With the help of donations from the network and the health shop and a lot of personal contribution and commitment from the squatters* and supporters*, the house was made winterproof and gradually the rooms were made usable. The beautiful brick courtyard buildings were preserved and the façade and the entire house were carefully renovated. Quite quickly, a café with a neighbourhood kitchen was built in the shop flat, where there was a hot meal every day. This was the Café Schlüpber – so called because the shop used to be a laundry shop.

Then the movement room – the jumping floor – was completed, the ambulance (today: health consultation) and the bathing centre.

Bathing centre and ambulance were important places for people from the numerous occupied houses and the entire city who did not have their own baths. The house developed into an important centre for naturopathy, self-help, bodywork and political groups. There was a strong networking with other street projects (Waldekiez, KOSMOS!) and many others. A newspaper was published – the “Doktorspiele”, which among other things dealt with diseases that were widespread in Kreuzberg in the 80s: Scabies, head lice, impetigo contagiosa (“drag shit” – a very contagious skin infection), hepatitis A, etc. The newspaper gave instructions for protection and self-treatment with simple means.

From 1983 onwards, the HeileHaus received financial support from the Senate as an institution for “health promotion for the socially disadvantaged”. In 1996, the administration of the project work was transferred from the Senate to the LIGA (Association of the Central Associations of Independent Welfare Work). Time and again there were cuts in funding and threatened cuts in funding. With great commitment and dedication, however, it has been possible until today to ensure that this important house receives basic financing. The work has always been supported by many volunteers.

For many years – until the move to Bethanien in 2009 – the self-governing Heilpraktikschule was a subtenant in the rooms of the HeileHaus. The basic services (bathing center, washing machines, health counselling and group offers and rooms) are maintained until today. Since a few years there is again a club cafe with a neighbourhood kitchen – this time in the shed on the farm. The range of offers was extended by educational offers for kindergartens, schools, groups of women and senior citizens.

After the fall of the Berlin Wall in 1989, our target group changed over the years:

More and more people from Eastern European countries use the hygiene services of our institution.

When the refugee caravan set up a tent camp at Oranienplatz in 2012, we were confronted with an average of 120 bathers for almost two years on the bathing floors reserved for men. At the time, we had neither enough employees* nor the necessary financial resources to cope with the steadily rising electricity and gas costs, so we asked the Friedrichshain-Kreuzberg district for help. They supported us – successfully – in applying for subsidized jobs via the Job Center. We also received a generous donation from Dr. Franz Schulz, then mayor of the district.

Not only our visitors, but also the number of visitors changed continuously. Their spectrum ranged from migrant workers from Eastern Europe and refugees from African countries to people belonging to ethnic minorities such as Roma and Sinti. In October 2015, we also began supporting emergency shelters in Friedrichshain-Kreuzberg and Lichtenberg. In particular, the gyms used as emergency shelters did not have sufficient shower facilities or washing machines to meet the needs of the refugees. In the further course we helped other Berlin emergency shelters, which were also overwhelmed with the fulfilment of the hygienic needs of the refugees.

In the last two years welcome classes of different Berlin schools have often used our teaching kitchen for cooking and eating together.

At the beginning of 2017, we began to offer Arabic-speaking refugees help with correspondence with the authorities. In addition, in the summer of 2017, a corresponding offer was made for foreign-language refugees, extended to include help with legal problems. This support is based on the concrete needs of those seeking help and also includes support to various institutions. 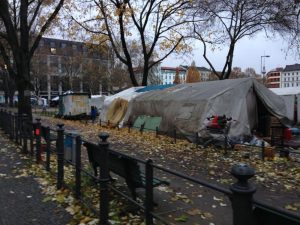